Finding The Voice of Heaven

In 1977, the Cecil B. DeMille papers (MSS 1400) were donated to the BYU Special Collections.  In this collection, we have 1,263 boxes of correspondence, production-related artwork, still photographs, and AV materials that cover the career of one of classic Hollywood’s most dynamic and significant filmmakers.

One of the interesting pieces of information hidden in Special Collections concerns the casting and effects of the voice of God in the grand spectacle film The Ten Commandments (1956), starring Charlton Heston as Moses.  The voice of God is heard twice in the film, first out of the burning bush on Mt. Horeb, as God calls Moses to deliver his covenant people, and the second when God gives the Decalogue atop Mt. Sinai.

In his autobiography, DeMille speaks of how taxing a prospect this was.  The production team tried sound engineering tricks, tried mixing a chorus of voices from all over the world, and even tried recording under water.  He reveals that Charlton Heston’s own voice was actually used for the first time we hear God’s voice from the burning bush: “An ancient Jewish legend solved half our problem.  The Midrash Rabbah says that from the Burning Bush God spoke to Moses in the voice of Moses’ father, Amram, so as not to frighten him.  That lovely courtesy of God suggested that our audience too might accept a not unfamiliar voice, a little slowed and deepened: and so the Voice of God at the Burning Bush is Charlton Heston’s voice” [431].

The second time that God’s voice is heard is in the climactic special effects sequence when God’s fiery finger writes in stone as each commandment is given.  In the same autobiography, DeMille rec

alls, “It was impossible to find that voice, until one day Henry Wilcoxon asked me to come to the projection room and listen to some readings of the Commandments by different voices.  One was right.  Henry asked me if I recognized the voice.  I did not.  He told me then whose it was: a man I had known for many years, not a professional actor, whom Henry had persuaded to come to the dubbing-room and record the lines spoken by the Voice of God at the giving of the Commandments, without telling me that it was being done. It was agreed among us that, out of reverence for the part of the Voice of God, the name of the man who played it should not be revealed. I will not reveal it here” [431].

However, after DeMille’s death, Delos Jewkes, a Utah-native and featured soloist with the Mormon Tabernacle Choir, revealed his role in the production.  Former curator of the Arts & Communication collection in the L. Tom Perry Special Collections, James V. D’Arc explains, “Sometime after DeMille’s death in January, 1959, it was noised about that one Delos Jewkes, a native Utah singer and sometime bit-playing actor in a number of movies, including The Music Man (1962), began speaking to groups (including LDS fireside presentations) about his years in the music and movie business. In newspaper articles in Utah County newspapers (he retired to American Fork), he claimed to have been hired by Paramount Pictures to be the Voice of God for only one sequence in the film.  As I have repeatedly watched the Finger of God sequence, and having heard Jewkes’s basso profundo voice of his in other films, I have no doubt that Jewkes’ claim was correct.”

Confirming this, an audio engineer recently slowed down a recording of Jewkes voice 14% and found it to be virtually identical to the recording in the film.

Indeed, a reference to this can be found in the DeMille papers. Inside Box 683, Folder 4 in the DeMille collection,  we found a note dated March 4, 1955 which includes a stapled piece of paper verifying that earlier on February 28th, two men had come in to record for Mr. Wilcoxon.  They were Delos Jewkes and Thurl Ravenscroft (of You’re a Mean One, Mr. Grinch fame). 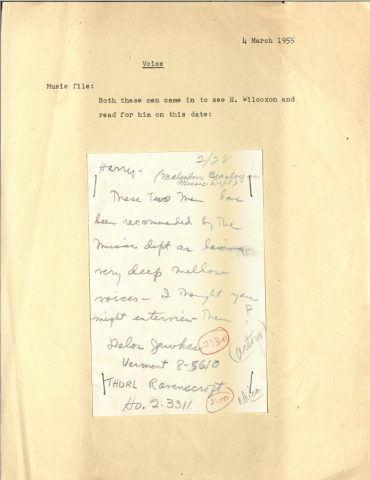 While maybe not a signed contract, or a definite ‘the Voice of God was ________,’ it pieces together a likely scenario.  Also in the same box and folder are discussions of how the Voice of God would be handled with tact in various language translations and for certain audiences worldwide.  It goes to show what deep treasure troves we have here at the HBLL, just waiting for student scholars and researchers to come uncover. So come down and look through a box, or read an autobiography of your favorite filmmaker.  You never know what you might find.

Special thanks for research assistants Elizabeth Condie and Brittany Brockbank; and of course Jim D’Arc, who had much of this in his head.