This month in Reformation history

The winter of 1520-1521 marked a crucial turning point in the theological conflict between Martin Luther and the papacy. Pope Leo X issued an official decree (or “Bull”), Exsurge Domine on June 15, 1520 which condemned Luther and his teachings. Luther received a copy of the decree in October. It gave him 60 days to recant. Instead, Luther wrote more tracts against the Pope, and on December 10, he burned the decree in public.

Both the Pope and the newly-elected Holy Roman Emperor, Charles V, felt that something needed to be done about Luther. The Pope formally excommunicated him on January 3, 1521, and asked Charles to enforce civil penalties. The Holy Roman Empire held a regular council, or “Diet,” to settle disputes between various states in the empire, which opened on January 23, five hundred years ago. Luther was summoned to appear before the Diet, though he would not arrive until April. He expected to be able to debate his ideas before the civil and ecclesiastical authorities, unaware he was on a collision course with the Emperor and Pope who wanted him to recant his beliefs. 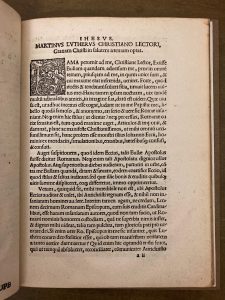 Special Collections owns copies of many of Luther’s writings from the winter of 1520-1521, including his polemical response to the papal decree, entitled “Against the Execrable Bull of the Antichrist” (shown here) and more conciliatory writings like “On the Freedom of a Christian.” To find more key works by Martin Luther, visit the Renaissance and Reformation Collection page or search the library’s catalog.