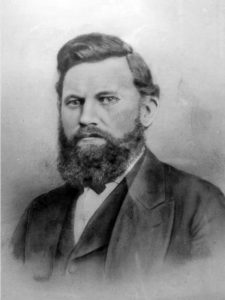 L. Tom Perry Special Collections is pleased to announce the availability of a newly digitized collection: Jesse Nathaniel Smith letter (MSS 6488). This letter was written on March 4, 1861, to Samuel H.B. Smith, the son of Samuel Smith, who was the younger brother of Hyrum and Joseph Smith. In the letter, Jesse describes his life as a missionary in Denmark. He talks about the people he is serving and the type of people who are accepting the gospel he is preaching. The letter is short, but in it Jesse implies that another letter was sent in the envelope, intended for Joseph F. Smith, the son of Mary Fielding and Hyrum Smith. At the time Jesse served his initial mission in Denmark, his cousins (once removed) were serving missions in England. Since they were all engaged in missionary work, the letter shows a deep bond between the cousins. The letter alludes to the fact that the cousins had been writing one another throughout their missions, and that this is just one letter amongst a slew of others.

Jesse Nathaniel Smith (1834-1906) was born to Silas and Mary Aiken Smith in Stockholm, New York. His father died when Jesse was four-years-old and the Smith family was living in Illinois. When the Church of Jesus Christ of Latter-day Saint migrated from Illinois to Salt Lake City, the teenaged Jesse helped his mother cross the plains. Upon arriving in Utah, Jesse was sent to help settle the town of Parowan. In 1861, Jesse embarked on the Scandinavian Mission for the Latter-day Saint Church. His first assignment was in Denmark. He later served as president of this mission in 1868. Living in Utah, Jesse Smith held multiple civil positions and assisted with Indian Wars. He also helped to settle colonies in Arizona and New Mexico. A practicer of plural marriage, Jesse married five women and had forty-four children. Jesse Smith died in Snowflake, Arizona at the age of seventy-two.