This month in Reformation history: The Edict of Worms 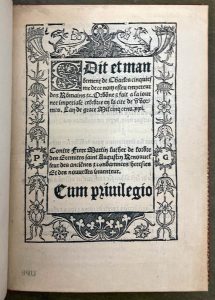 The Imperial Diet was divided on what to do about Luther. While some felt he should be condemned, others feared that any action against Luther would lead to rebellion in areas of the Holy Roman Empire which supported him. On May 8, 1521 Emperor Charles took the decisive step of drawing up an edict against Luther. He waited until many of the council members had left Worms to officially sign the edict, officially issuing it on May 25 – five hundred years ago today.

The Edict of Worms detailed Luther’s doctrinal errors and banned his writings. Furthermore, it declared him a heretic and enemy of the state. It was enforced haphazardly throughout the Empire; some sympathetic states and rulers allowed Luther and his followers to travel, preach, and publish.

BYU owns a French language copy of the Edict of Worms printed in Paris. It is one of several editions, Latin or vernacular, issued on behalf of the Emperor in 1521.