125 years ago this month, William Morris and his compatriots at the Kelmscott Press finally published the book which had occupied them since 1892. The Works of Geoffrey Chaucer Now Newly Imprinted, also known as the “Kelmscott Chaucer,” was the most elaborate – and significant – work issued by the press. 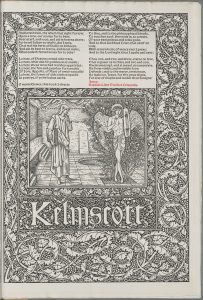 Morris was a lifelong devotee of medieval art and literature, and publishing the complete works of England’s most famous poet of the Middle Ages was a fitting project for him. He owned a successful business designing Gothic-inspired decor and furnishings for homes and churches. Morris founded the Kelmscott Press in 1891 with the goal of producing fine books in the same manner as early European printers, with handmade papers, hand-carved woodblocks, and a hand-operated printing press. Morris designed his own type and enlisted his old friend, Pre-Raphaelite artist Edward Burne-Jones, to illustrate many of the books. The output of the Kelmscott Press continues to inspire artists and designers today. It is an important component of the HBLL’s Modern Fine Press collection because of Morris’s influence on the private press movement in Great Britain and the USA.

This year marks the 130th anniversary of the founding of the Kelmscott Press. The William Morris Society in the United States is organizing an international celebration which culminates on June 26, 2021, the 125th anniversary of the publication of the Kelmscott Chaucer. The HBLL is participating with a small case exhibit, “Making the Kelmscott Chaucer,” on display this month in the Special Collections reading room. A copy of the Chaucer will be featured along with several proof prints created during the printing process.