This week marks the 250th anniversary of the birth of Scottish novelist and poet Sir Walter Scott, born in Edinburgh on August 15, 1771.

Scott was one of the most popular English language authors of 19th century, whose work was frequently reprinted in both Great Britain and the USA. His Romantic poetry and historical novels had a huge impact on literary culture and reading tastes, literary tourism, and popular interpretations of Scottish culture.

As a young child Scott was sent to live with his paternal grandparents in the rural Scottish Borders to recuperate after a bout of polio. There he was introduced to traditional tales, popular songs, and stories of the Jacobite rising of 1745. Though trained in the law, Scott remained interested in poetry and literature. His first attempts at publishing were translations of German Romantic poems in the 1790s. He began collecting traditional ballads, which he published as Minstrelsy of the Scottish Border in 1802.

Over the next decade, Scott would edit numerous historical documents and literary texts from Scotland, particularly from the seventeenth century. He also composed his own poetry and prose on historical themes. The Lay of the Last Minstrel, a chivalric ballad, was published to acclaim in 1805. Marmion, a tragic romance set in the early 16th century, appeared in 1808.

Scott’s third long poem, The Lady of the Lake, was set in the Scottish Highlands. The books was a literary smash, selling over 20,000 copies when first published in 1810. The success pushed Scott to pick up the story again in the form of a historical novel. As a first novel, Scott chose to publish Waverley anonymously in 1814, though his authorship was widely acknowledged. Waverley sold out quickly and set Scott on a very successful career as a novelist. By 1817, his works were so popular that his publishers were printing his new titles in editions of 10,000, an unprecedented number in a time when novels were regularly issued in editions of around 1,000. 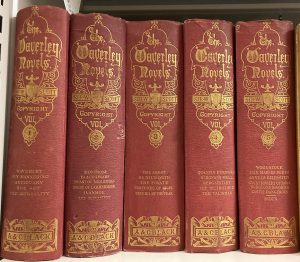 Special Collections owns a complete set of Scott’s novels in first edition copies, including many as issued in their original publisher’s boards. It also owns copies of Scott’s works in Victorian-era reprints. The collection attests to Scott’s popularity and shows the changing nature of the literary market as the novel came to prominence in the 19th century.