During late 2021, libraries, museums and universities around the world celebrated the 450th anniversary of the birth of astronomer Johannes Kepler. Kepler was born December 27, 1571 near Stuttgart in modern Germany. 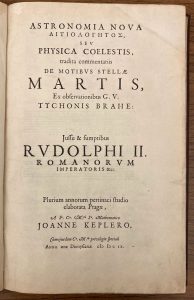 Kepler is best known today for his three laws of planetary motion, developed from years of studying the motion of the planet Mars. He was able to improve on the Copernican model of the solar system by describing how planets move around the sun in elliptical orbits. Kepler also formulated the mathematical rules which govern the speed and size of a planet’s orbit.

Kepler described his laws of planetary motion in two different books, Astronomia nova (New Astronomy, 1609) and Epitome Astronomiae Copernicanae (Summary of Copernican Astronomy, 1618). The L. Tom Perry Special Collections owns copies of both titles, along with a number of other early works by Kepler.