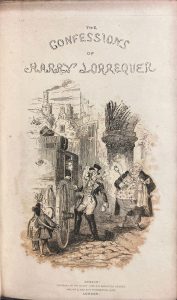 June 1 marks the 150th anniversary of the death of Victorian novelist Charles Lever (1806-1872). Lever was born into a middle-class Anglo-Irish family. He began writing to supplement his income while training to become a physician. He quickly found success writing rollicking tales of Ireland and of military life, drawing on his childhood in Dublin and his travels to continental Europe, where he would permanently settle. Lever authored 30 novels and numerous essays and stories during a career that spanned over four decades.

Lever was a close contemporary of Charles Dickens and William Thackeray, and nearly as popular with readers of the early Victorian period. They published with the same firms and worked with the same illustrators. Like Dickens and Thackeray, Lever edited a literary journal (the Dublin University Magazine, from 1842-45), and he contributed essays and serialized novels to the major literary magazines of the day. Lever’s novel A Day’s Ride was published alongside Dickens’ Great Expectations in All the Year Round in 1860 and 1861.

Yet Lever, despite his early success, gradually fell out of favor with readers and is virtually forgotten today. Critic Stephen Haddesley attributes Lever’s fall from popularity in part to the unevenness of his literary output. Lever typically worked on two novels simultaneously to be able to keep up with the demands of serial publication and his gambling habit. He was never diligent at plotting, and his rushed writing schedule was also thwarted at times by installations getting delayed or lost in the mail (the ending of The Confessions of Harry Lorrequer had to be completely rewritten due to a shipping mishap). Critics also note that Lever’s depictions of Ireland challenged both his Irish and English audiences. As an expatriate observing Irish society from Europe, Lever’s writing did not always conform to the sociopolitical views of either side, perhaps contributing to his waning popularity.

Special Collections owns copies of 18 of Lever’s novels, including several titles in their original monthly parts. Many feature illustrations by Hablot Knight Brown, also known as “Phiz,” who is perhaps best known for illustrating Oliver Twist.