We are happy to announce our next installment in the ARCHIVE CLASSICS series.

A spiritual medium bridges our physical world and the realm of deceased spirits.

A visiting psychologist, who studies the limits of fear, wants to see how far she and her husband are willing to go to experience the thrill of the unknown. 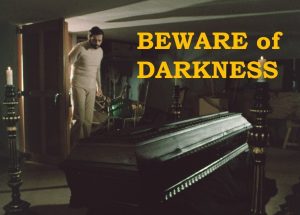 In the early 1970s, recent convert to the Church, Jose Maria Oliveira, sought to use his position, expertise, and connections in the Spanish film industry to expose audiences to the plan of salvation.

He produced two films, BEWARE OF DARKNESS (1973) and THE DEAD, THE DEVIL AND THE FLESH (1974). Both deal with tortured souls in the afterlife who will only find peace by accepting Jesus Christ as their personal savior. These were commercial films, with many genre elements that would broadly qualify as ‘horror’ films, but he additionally sought to promote his faith through them. 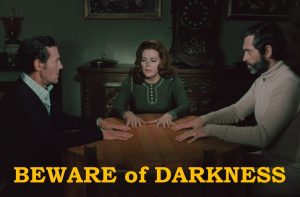 The BYU Motion Picture Archive, located in Special Collections, acquired the likely only remaining copies of these films in 2020. Newly-restored in High Definition, these films will be presented and premiered to a public audience in the Library auditorium this Fall for the first time in over 50 years for reconsideration (October 21 and November 21, respectively).

Jose Maria Oliveira is a filmmaker who began his career by working for the William Morris Agency in Spain. In 1968 his life would be changed with his conversion to the Church of Jesus Christ of Latter-day Saints, and he had to travel to France to be baptized as the Church was prohibited in Francoist Spain. Desirous to spread his excitement about his new faith, and his particular interest in the ideas of the spirit world, he called upon actors and other industry professionals to support his production of two feature films, BEWARE OF DARKNESS (1973) and THE DEAD, THE DEVIL AND THE FLESH (1974). Both of these films engage with the world spirits enter when separated from their bodies, seeking to offer audiences both entertainment and opportunities for reflection.