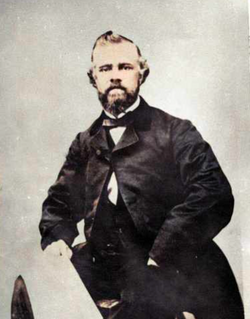 L. Tom Perry Special Collections is pleased to announce the availability of a newly digitized collection: David Candland diary (MSS 1627, Box 1, Folder 1). This is a diary kept by David Candland from 1841 to 1861. The item documents Candland’s service in the British Mission from 1846-1847, and the Eastern States and British Provinces (Canada) from 1851 to 1852. Candland also includes his experience during the Utah War of 1857-1858. Also includes information about Candland’s family and of his occupational activities. Also includes some hand-written lists and charts, information about his family, and a few diary entries on his birthday in 1900 and 1901. There are also a few pages at the very end of the volume that include some entries about marriages, births, deaths, and baptisms. In total there are about 107 pages written on, with the majority of the volume being blank.

David Candland was born on October 15, 1819 in Highgate, Middlesex County, England to Samuel Candland and Sarah Betts. He was baptized in May of 1841 at the age of twenty-two and confirmed a member of The Church of Jesus Christ of Latter-Day Saints by Lorenzo Snow.  In 1842, Candland sailed for the United States with the Orson Hyde Company, arriving in Nauvoo, Illinois in May. On November 16, 1842 he was ordained a member of the Sixth Quorum of the Seventy. He married Mary Ann Barton on March 28, 1844. In Nauvoo he worked as a school teacher and store clerk and eventually became a secretary of President Brigham Young.

Candland was called as a missionary to the British Mission in January 1846. During his mission, he authored the first published series of Latter-day Saint pamphlets, known collectively as “The Fireside Visitor; or Plain Reasoner” (copies of which can be found online in the Internet Archive).  In August of 1847, he returned to Winter Quarters, Iowa and soon after moved to Kanesville, Iowa where he worked as a store clerk. In 1851 Candland was called on another mission the Eastern States and British Provinces, returning to Kanesville in March 1852. Soon after he emigrated to Utah with the Ezra T. Benson Company.

In August 1856, Candland opened the Globe Restaurant and Bakery, although it closed two years later. In Salt Lake City he taught school, clerked, and as stage manager for the Deseret Dramatic Association. He also served as doorkeeper at the Salt Lake Tabernacle. In 1859, Candland was appointed to represent Salt Lake County in the Utah Territorial Legislature. In 1861, he moved his family to Mount Pleasant, Utah where he served as justice of the peace, assessor and collector, and prosecuting general attorney for Sanpete County. Candland died on March 12, 1902 at the age of 82. He was the father of thirty-six children.