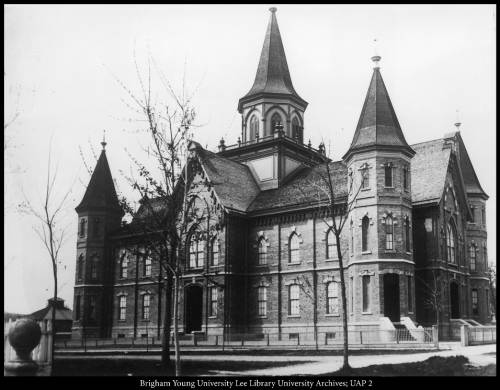 L. Tom Perry Special Collections is pleased to announce the availability of a newly digitized collection: Provo Tabernacle account books (MSS 246). The collection contains handwritten ledgers and account books related to the construction and function of the Provo Tabernacle between 1882 and 1894. The items list financial donations and other contributions given by the various wards of the Utah Stake to support the tabernacle and stake functions. 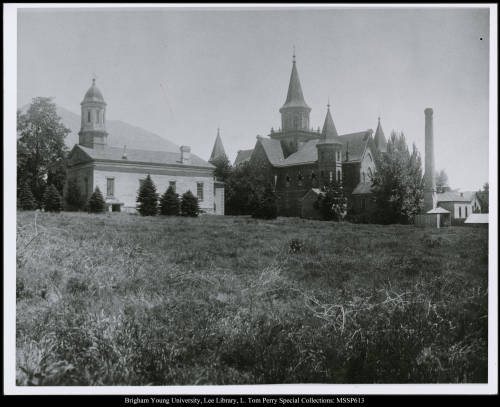 The Provo Tabernacle served as tabernacle of The Church of Jesus Christ of Latter-day Saints from 1898 to 2010 in downtown Provo, Utah. During these years it served as a venue for various religious and cultural events.

The first tabernacle was smaller and stood near the larger one from 1861 to 1919. Construction for the second and larger Provo tabernacle, often referred to as the Utah Stake Tabernacle or the New Provo Tabernacle, started in 1883. The building was designed by William Folsom, and could seat 3,000 individuals in the auditorium and balconies. Harvey H. Cluff oversaw construction. Much of the funding for the construction came from donations by wards in the Utah Stake, which included most of Utah County. The tabernacle was in use by 1886, when it held the Church’s general conference on April 6 when members of the First Presidency were in hiding for practicing polygamy. The tabernacle was dedicated on April 17, 1898 by George Q. Cannon, with President Joseph F. Smith also in attendance.

Over the years, the Provo Tabernacle hosted several important community and cultural events, including performances by Abbie Carrington in 1891 and Sergei Rachmaninoff in 1938, and a visit by U. S. President William Howard Taft in 1909. In 1975, the building was added to the U.S. National Register of Historic Places.

A four-alarm fire was reported at the tabernacle early in the morning of December 17, 2010, entirely gutting the building and causing the roof to collapse. In the October 2011 semi-annual general conference of the Church, President Thomas S. Monson announced that the Provo Tabernacle would be rebuilt to serve as a second temple in Provo. A public open house was held in early 2015, and the temple was dedicated on March 20, 2016.