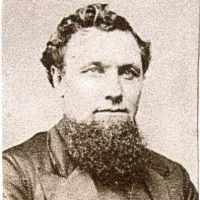 L. Tom Perry Special Collections is pleased to announce the availability of a newly digitized collection: Eli Wiggill autobiography (MSS 9137).  This collection consists of a four-volume handwritten autobiography of Eli Wiggill. It includes an account of the emigration from England of the settlers of South Africa, the wars and events of South Africa, the arrival of missionaries from The Church of Jesus Christ of Latter-day Saints in South Africa, immigration to the United States and travel on the Mormon Trail, the diamond works in South Africa, and an account of familial events in Utah. The record was created by Wiggill in 1883, one year prior to his death. It also includes a brief entry by his granddaughter Susie M. Dodge, written a few years after Wiggill’s death.

Eli Wiggill was born on November 5, 1810 or 1811 in Gloucestershire, England to Isaac Wiggill and Elizabeth Grimes. In the Winter of 1819-1820, his family migrated to South Africa where they were some of the first English settlers in that country. On February 20, 1831, Eli married Susannah Bentley in Grahamstown, South Africa, and they had nine children together. Eli worked as a wagon maker. In 1837 Eli began working as a preacher for the Methodist Wesleyan Church, for which had been a member since the 1820s, and later taught Sunday School and doing other work in building up the mission and teaching the native people of the area. They survived the Kaffir Rebellion (1835) and the War of the Axe (1850). In 1857, Wiggill was introduced to missionaries of The Church of Jesus Christ of Latter-day Saints and was baptized on March 1, 1858, along with his wife, Susannah, and daughter, then later re-baptized with many of his family on June 1, 1858. Wiggill would lead the branch of Latter-day Saints until February 1861, when he and his family migrated to Utah. The Wiggill family eventually settled in Kaysville, where Wiggill was involved in carpentry and farming. In August 1869, Susannah Wiggill died of dysentery. Soon after this, Eli determined to return to South Africa, which he did as a missionary from from December 1869 to May 1873. In 1873, Wiggill married Ann Brown Hammer. Eli Wiggill died on April 13, 1884 and was buried in Kaysville, Utah.