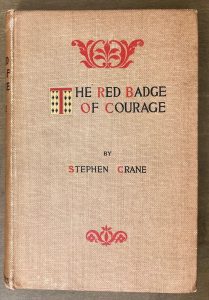 Today marks the 150th anniversary of the birth of American writer Stephen Crane. While Crane’s reputation suffered for several decades after his death, his writing had a strong influence on later 20th century writers. Today he is recognized as a major figure in American literature, particularly as a representative of late 19th century Naturalism.

Crane began writing in his teens. He eventually dropped out of college to pursue writing professionally, producing short stories and reporting for newspapers and other periodicals. He soon began writing novels and poems as well as expanding his journalism career. His poetry was initially panned by critics, but The Red Badge of Courage, his second novel, was widely acclaimed and sold well. Crane spent several years traveling the world as a war correspondent and publishied several more books of stories and poems before succumbing to tuberculosis at age 28.

The L. Tom Perry Special Collections contains complete run of Crane’s trade publications from 1895-1903, from The Red Badge of Courage (first edition pictured above) and Maggie: A Girl of the Streets to the posthumously-published Last Words and The O’Ruddy. The Will Bradley cover design for Crane’s second book of poetry, War is Kind, is shown below. 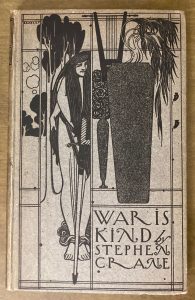