Feb. 10 marks the 200th anniversary of the birth of Victorian writer Eliza Lynn Linton. Lynn Linton is considered the first female salaried journalist in England. Her writing career was profitable but not without controversy. 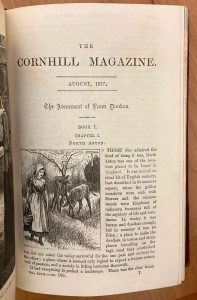 Elizabeth (Eliza) Lynn was largely self-taught, the youngest child of a widowed clergyman who had free rein to peruse her father’s library. She left home for London at 23 intending to make her way as an author. She published two novels before joining the staff of The Morning Chronicle in 1848. After her third novel, Realities, was panned for its shocking depiction of the life of a stage actress, Lynn turned to journalism full time. She contributed hundreds of articles to newspapers and magazines, including the Literary Gazette, The Cornhill, and Charles Dickens’ Household Words, over the course of her career. She worked for several years as a foreign correspondent in Paris, where she met engraver William James Linton, a widower with seven children. Lynn married him in 1858 but they soon grew apart, ultimately separating in 1867.

After her marriage, she wrote under the name E. Lynn Linton, keeping her maiden name equally prominent with her husband’s. She continued to write essays, articles, and short fiction for periodicals and resumed writing novels including the highly popular romance The Atonement of Leam Dundas (1876) and the controversial True History of Joshua Davidson (1872), which critiqued the Church of England.

Though Lynn Linton lived most of her life independently, paradoxically, she grew increasingly conservative and became a vocal critic of women’s rights. Her strident articles in the journal Saturday Review were collected in 1883 as ‘The Girl of the Period’ and other Social Essays. The New York Times remembered her complicated legacy at her death in 1898: “Her dislikes were many, not to persons, but toward modern society ways, thoughts, and manners…. It is difficult to understand how a sweet-faced old lady with white locks, gold spectacles, and a placid manner wrote such sharp, incisive words.”