2022 marks the 500th anniversary of the publication of two important early Bible translations. 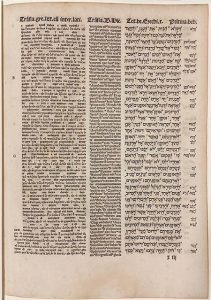 The Complutensian Polyglot or Bible of Alcalá was the first Bible to include the text in multiple languages (in this case, Greek, Latin, Hebrew, and Aramaic). The project was conceived by Cardinal Francisco Jiménez de Cisneros, a powerful Spanish religious leader. Cisneros acquired a number of Biblical manuscripts and enlisted a group of Spanish scholars, including several converts from Judaism, to edit the texts. The scholars met at the Complutense University in the city of Alcalá de Henares, from which this Bible edition takes its name. Their work began in 1502. They were able to print copies of the polyglot New Testament in 1514, but held back publication until the Old Testament was complete. 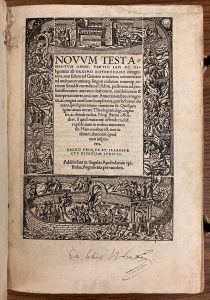 As the Complutense University translators continued their work, Dutch scholar Desiderius Erasmus learned of the project. Erasmus was working on an edition of the Greek New Testament compiled from newly-discovered manuscripts which would be accompanied by his new Latin translation. He secured a special four-year privilege from both the Pope and Holy Roman Emperor Maximilian, which gave him exclusive license over publishing the Greek Bible, in 1516. So when the Complutensian translation was completed in 1517, publication was delayed until the Pope could grant approval in 1520. Scholars believe that the Complutensian Bible was not widely published until 1522.

Meanwhile, Erasmus continued to refine his dual-language Greek and Latin New Testament. Because he rushed his edition to the press, many typographical errors appeared in the 1516 edition. A second edition appeared in 1519, and a third edition in 1522. The 1522 edition would later be used as a major source for the translators of the King James Version of the Bible in the early 17th century.