To find options to see SCARED STIFF, you can look at streaming options HERE since we couldn’t find a disc at any local library.

There’s something rotten on Lost Island, or at least something haunted. Dean Martin and Jerry Lewis inadvertently agree to help the beautiful Lizabeth Scott return to her ancestral homeland off the coast of Cuba and hilarity ensues. Martin stows away in Scott’s trunk when pursued by the police for a murder he did not commit. Then, Lewis stows away in the same trunk when mobsters seeking revenge for the mob boss’s philandering girlfriend fingers his character. Along the way a real mystery ensues as Scott’s island is shown to contains an enormous treasure. These situational events showcase the comedic and singing talents of what had become the famous Martin and Lewis team.

Viewers of the film will be led along by the frenetic pace of the story, jumping from one set of problems to another all because of Martin and then made worse by Lewis. If any moment becomes a little too serious, or romantic, between Martin and Scott, Lewis appears with a host of related difficulties made worse by his slapstick attempts to help. Motivations aside, Lewis as the actor is trying to be as irritating to the film goer as possible without actually turning them off to the film, which in turn makes Martin seem all the more smooth and debonair by comparison.

One scene to watch for in the film is when the two are pressed into service on the boat ride to Cuba to pay their passage. Martin sings, while Lewis “ruins” the show, in the same fashion as many of their live performances. It is a way of seeing them on stage without going to the clubs along the East Coast they were famous for playing. In these scenes you’ll also see the famous Brazilian samba singer Carmen Miranda, in her final film appearance before a fatal heart attack. It was a fitting coda for the 1940s film and music star.

Dean Martin and Jerry Lewis shared the professional spotlight as a team for only ten years, but what a ten years it was. Seventeen film appearances, their own television show on the fledgling NBC network, five years as the stars of their own radio program and countless club shows along the way. As fate would have it, their last club appearance on 25 July 1956 at the Copacabana Club in New York came exactly ten years to the day after their first show in Atlantic City. And, like much of their stage act appeared, being thrust together in 1946 was accidental, when Lewis suggested to the club manager Martin take the place of the absent regular club singer. The rest quickly became history. 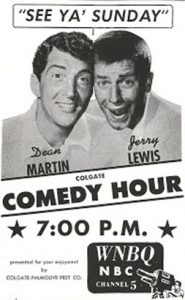 Behind the scenes, and thankfully outside of the viewers enjoyment, the duo was in trouble. They didn’t want to make the film, with Martin in particular feeling like the story wasn’t very original. However, Paramount held them to their contract and filming took place in June and July 1952. Released in April 1953, it was a financial success for the studio and the actors. Tension between the two stars percolated beneath the surface during the filming and for another four years, until their sudden break immediately following the show. In later years neither could readily identify a reason, but Lewis said they didn’t talk privately for twenty years.

For After the Movie:

There is a double homage embedded within Scared Stiff, both revolving around Bob Hope. You’ll remember when confronted by Mr. Ortega, the mysterious and ultimately mortally dangerous antagonist of the film, Dean Martin says he’s a ghost buster, like a trust buster, a bronco buster, or a gang buster. This may be the first time the term is used in film and inadvertently influenced the 1984 comedy, Ghostbusters. Dan Aykroyd credits the now more obscure Bob Hope and Paulette Goddard 1940 film, The Ghost Breakers, as inspiration for his iconic supernatural fighting team. Indeed, Scared Stiff is a thinly veiled remake of this earlier film. 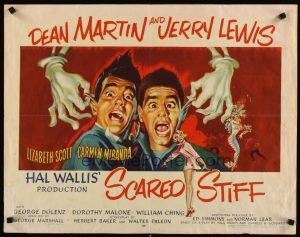 The second homage to Bob Hope is far more direct, as you saw just a few minutes before the film ended. While Scared Stiff was the eighth feature film for the Martin and Lewis duo, it is their ninth appearance on screen. They had appeared in the 1952 hit, The Road to Bali, in a brief cameo every film goer of the time would have recognized. A short two years later Hope and Crosby returned the favor.