Detectives in “The Strand”

Detective fiction was growing in popularity when London publisher George Newnes decided to launch a new magazine in 1890. The very first issue, dated January 1891, led with the detective story “A Deadly Dilemma” by Canadian author Grant Allen. Over the next six decades, The Strand Magazine would feature a host of fictional sleuths, most notably Arthur Conan Doyle’s Sherlock Holmes and Agatha Christie’s Hercule Poirot. This blog post will look at some of the lesser-known detective stories published in The Strand in its early years, with images from original issues in the Victorian and Edwardian Collections. 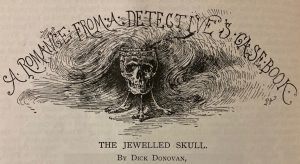 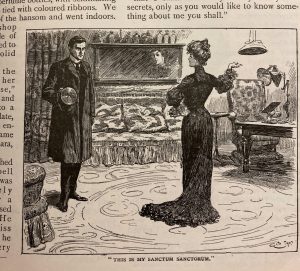 Writer L.T. Meade (Elizabeth Thomasina Meade Smith) teamed up with a medical doctor, Clifford Halifax, to create a series of mysteries solved with knowledge of medicine and psychology, entitled “Stories from the Diary of a Doctor.” The first series ran in 1893 alongside Memoirs of Sherlock Holmes stories and the second series ran in 1895. Meade would create a second popular detective series for The Strand in 1902-03, featuring a female criminal mastermind named Madame Sara, “The Sorceress of the Strand.” 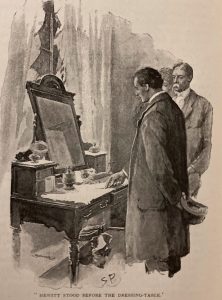 In 1894, Arthur Morrison’s detective Martin Hewitt kept readers interested in the absence of Sherlock Holmes. The stories were designed to be similar but different enough from Doyle’s; there is a Watson figure, a journalist named Brett. The Hewitt and Holmes mysteries even shared the same illustrator, Sidney Paget. Morrison published additional Martin Hewitt stories in Windsor Magazine, a competitor to The Strand, throughout 1895.

Grant Allen introduced two women detectives to readers of The Strand in 1898-99: Miss Cayley, a single woman who solves crimes while traveling through Europe, and Hilda Wade, a nurse with a photographic memory. Allen dictated the final episode in the Hilda Wade series to Doyle on his deathbed. Other notable mystery content in early volumes of The Strand includes stories featuring gentleman criminals by popular writers Benjamin Farjeon and Florence Warden. 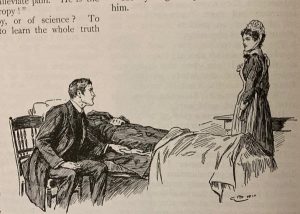 Looking to read some of these stories? Many of these detective series were gathered and published in book form. Oxford University Press published an anthology of the best Detective Stories from “The Strand” in honor of its centenary in 1991. And you can find links to digitized copies of The Strand in the library’s catalog through the Lee Library’s membership in HathiTrust.