This month in Reformation history: Luther at the Diet of Worms 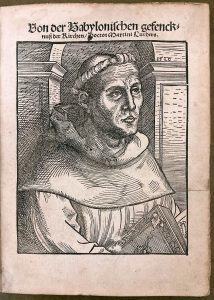 When Charles V was crowned Holy Roman Emperor in October 1520, he was immediately confronted by urgent political, military, and social challenges within his new realm. He called an imperial council, or Diet, to be held in the city of Worms on the Upper Rhine in modern Germany. The council opened on January 23, 1521.

The issue of religious reform came up early in the council’s discussions. Many secular leaders within the empire were unhappy with perceived mismanagement and abuses by the Church, which Martin Luther had been openly preaching against. On the other hand, the Pope had excommunicated Luther and Church leaders urged Charles to suppress the growing religious unrest in German lands. But Charles would not be pushed into a hasty decision. On March 6 he issued a summons to Luther to appear before the council and granted him safe conduct on the journey from Wittenberg.

Luther arrived in Worms on April 16. The following afternoon, he appeared before the council. Luther was expecting to be invited to debate his ideas about Church reform. Instead, he was asked whether he wished to affirm or recant his published writing. Luther begged to be allowed to prepare a response. He returned to the council on April 18, telling them that he was willing to retract his work if someone could prove to him—based on scripture—that he was in error, but no one had satisfactorily pointed out where he was wrong.

Charles, unswayed by Luther’s response, resolved to ban him from preaching or writing and to proceed with heresy charges. But other members of the Diet wanted to further discuss the case, and to see whether Luther could truly be swayed by arguments from scripture. Charles could not issue a formal decree without the consensus of the Diet. While the council discussed his fate, Luther left for Wittenberg, under another letter of safe conduct. Frederick of Saxony, prince of Luther’s region of Germany, came to his aid by staging an abduction so that Luther could hide out until the scandal died down.