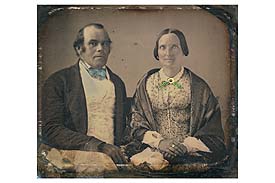 L. Tom Perry Special Collections is pleased to announce the availability of a newly digitized collection: Parley P. Pratt and Belinda Marden Pratt book of poetry and accounts (Vault MSS 725).  This collection contains one notebook with poems by Parley P. and Belinda Marden Pratt. One poem deals with the martyrdom of the Prophet Joseph Smith. Also includes some financial accounting written in the same book. These poems were likely produced in Utah in 1847.

Belinda Marden Pratt was born Melinda Marden on December 24, 1820 in Chichester, New Hampshire to John Marden and Rachel Shaw. She was converted to The Church of Jesus Christ of Latter-day Saints in 1843. She was sealed to Parley P. Pratt on November 20, 1844 in Nauvoo, Illinois, as Pratt’s sixth wife. She moved to Utah and was an active member of the Church there, serving as Relief Society president of her ward and later her stake. For more about her work in the Relief Society, found in the book The First Fifty Years of Relief Society (2008), click here. Belinda Marden Pratt passed away February 19, 1894 in Salt Lake City, Utah.

Parley Parker Pratt, Sr. (1807-1857) was an early leader of the Latter Day Saint movement whose writings became a significant early nineteenth-century exposition of the Latter Day Saint faith. Named in 1835 as one of the first members of the Quorum of the Twelve Apostles, Pratt was part of the Quorum’s successful mission to Great Britain from 1839 to 1841. Pratt has been called “the Apostle Paul of Mormonism” for his promotion of distinctive Mormon doctrines. Pratt was a noted religious writer and poet. One of Pratt’s most influential works was a book entitled A Voice of Warning (1837), first published in New York City. Pratt’s most well-known theological work was A Key to Science of Theology, which was published in 1855. Pratt’s Visions and Poetry also serve as the text for many songs now found in the Latter Day Saint Hymnal. Pratt’s writings also corroborate many events and revelations which are found in a book of Latter Day Saint scripture known as the Doctrine and Covenants. In total, Pratt is known to have written 31 published works, not including his posthumous autobiography. Pratt explored and surveyed Parley’s Canyon in Salt Lake City, Utah (named in his honor), and subsequently built and maintained the first road for public transportation in the canyon. Pratt practiced plural marriage. He was murdered in 1857 by the Hector McLean, estranged husband of his twelfth wife, Eleanor McLean, while on a mission in Arkansas. (Source: Wikipedia)