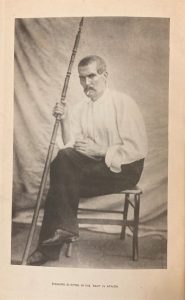 Burton had an amazing aptitude for languages and for blending in with foreign cultures, which he honed as a young English army officer. He served as an interpreter and spy in India, where he learned Arabic, Persian, and several Indian languages (biographers estimate that he ultimately mastered over 40 languages and dialects). After returning to England in 1849, he petitioned the Royal Geographical Society to support him on a risky adventure: making the hajj, or pilgrimage, to the Islamic holy cities of Mecca and Medina, then forbidden to non-Muslim Europeans. Armed with a command of Arabic and a deep familiarity with the religion and culture, he traveled to Egypt in April 1853 and disguised himself there for several months before embarking on the pilgrimage. He succeeded in reaching Medina in July 1853 and Mecca two months later. The notes he kept in secret were later published as A Personal Narrative of a Pilgrimage to Al-Madinah & Meccah (1855-56).

Burton lived or traveled on five continents. He made two dangerous expeditions in Somalia and the Central African Lakes after his hajj experience. Burton joined the British Foreign Service in 1861. He was posted to West Africa, Brazil, and Syria, publishing numerous accounts of his expeditions during these assignments. Burton’s 1860 trip to Canada and the United States included a visit to Salt Lake City, where he met Brigham Young. The City of the Saints and Across the Rocky Mountains to California, published in 1861, is one of the most famous 19th century travel accounts of territorial Utah and Mormonism.

Burton wrote over 40 books and countless articles during his lifetime. Besides his travel narratives, he made several translations of world literature, like Camoens’ The Lusiads, the Kama Sutra, and The Arabian Nights. He also published two volumes of his own verse, Stone Talk and The Kasidah. 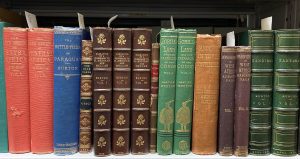