A Narrative of the Life and Travels of Mrs. Nancy Prince (1853). Nancy Gardner Prince was a free-born African-American woman from Massachusetts. She traveled to Russia with her husband, Nero Prince, who worked for several years as a footman at the czar’s court. After returning to the United States, Nancy went on two mission trips to Jamaica. She lectured and published on her travels as well as publishing several editions of this travel narrative. 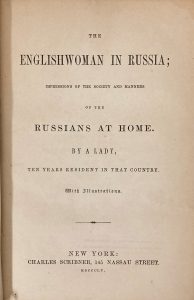 Another in-depth account of life in Russia is The Englishwoman in Russia: Impressions of the Society and Manners of the Russians at Home (1855). This work, by a pseudonymous “Lady,” has been attributed to Mrs. Andrew Neilson, the wife of an English businessman, but it has also been attributed to Sophia Lane Poole, author of The Englishwoman in Egypt, and to traveler and philanthropist Lady Judith Cohen Montefiore. 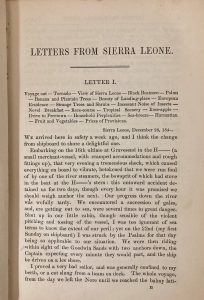 A Residence at Sierra Leone (1849) was compiled from the journal and letters of Elizabeth Helen Melville. Elizabeth and her husband Michael Melville lived in Freetown, Sierra Leone for many years while he worked in the British colonial government, including serving as a crown prosecutor fighting the slave trade and as Lieutenant Governor. Elizabeth’s book discusses her husband’s work as well as life and society in 19th century British West Africa.

Special Collections contains a wealth of travel accounts by 19th century women in books and periodicals. These books and other accounts can be found in the library catalog by using the subject search using geographic place names in combination with the search string “description and travel.”