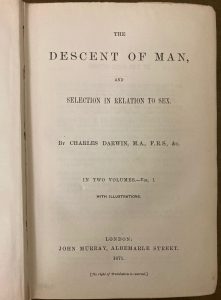 On this day 150 years ago, 24 February 1871, Charles Darwin’s The Descent of Man, and Selection in Relation to Sex was published by John Murray. On the Origin of Species had appeared 12 years earlier, introducing Darwin’s theory of evolution; with The Descent of Man, Darwin took the theory to its next logical conclusion by applying it to Homo sapiens. The Descent of Man actually marks the first time Darwin used the word “evolution” in print, on page 2 of the first volume. Murray issued 2500 copies in February 1871, but demand for the book was such that several thousand more copies were printed in March, April, and December of that year. Darwin was able to correct some minor printing errors in the various re-issues which help to distinguish the first issue from successive printings.

BYU Special Collections owns two copies of the first edition, first issue of The Descent of Man, which evidence a slight difference in height between the two copies. The second copy is of particular note due to its provenance. It was owned by Baroness Henrietta M. Stanley (1807-1895), a staunch 19th century advocate for women’s education. Baroness Stanley promoted the opening of the medical profession to women and was a founding patron of Girton College, the first women’s college at the University of Cambridge. Her signature, and a library shelfmark on the blank pages opening the first volume of her copy, are featured in the photograph below. 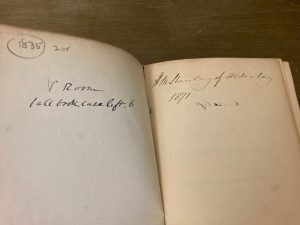