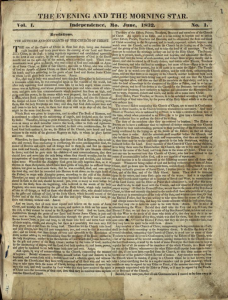 First page of The Evening and Morning Star, published in Independence, Missouri, June 1832

L. Tom Perry Special Collections is pleased to announce the availability of a newly digitized collection: Swallow family letters (MSS 7688). Letters written by Asahel and Prudence North, Luthera and Ransom Swallow, on August 23, 1834 from Illinois to their family in Vermont. The letter is addressed to Mr. Nahum Swallow, with an address to Brown’s Ville, Winsdor, Vermont. All four letters are written on a single folded sheet, and include updates about their activities. Also includes references to preaching by Latter-days Saint missionaries and reading the The Evening and Morning Star.  It is unclear if any of the Swallow family eventually joined the Church of Jesus Christ of Latter-day Saints, but their letter is a good source for early missionary efforts in the midwest in the early 1830s.

The Swallow family were farmers in Vermont and Illinois. Nahum Swallow (1771-1851) migrated with his wife Deidamia Woods (1778-1858) from Massachusetts to settle in West Windsor, Vermont in 1796. Together they had fifteen children, including Chester, Deidamia, Prudence, Nahum, Nancy, Ransom, Eliza, Gardner, Guy, Mary, Franklin, Olivia, Luthera, John, and Sarah Jane. In 1819, Deidamia married Timothy Ladd and Prudence married Asahel North. They moved with their husbands to Illinois, where they began farming. Other siblings later moved to join them in the West.