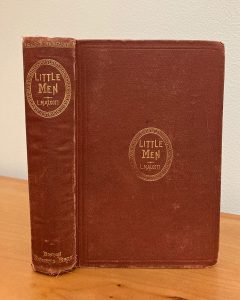 Louisa spent 1870 traveling Europe with her youngest sister, May, and May’s friend Alice Bartlett. Settling into Rome that winter, Louisa received word that her sister Anna’s husband, John Pratt, had died aged 37 of a sudden illness, leaving behind two young sons. Alcott threw herself into writing a long-promised sequel to Little Women, motivated by a strong desire to provide for her widowed sister and nephews. She completed a draft in a matter of weeks and sent it to her publisher in early 1871.

Little Men finds Alcott’s heroine Jo running a school for boys with her husband, Professor Bhaer. While following the adventures of the young pupils, the book is also suffused with the educational philosophies and practices formulated by Louisa’s father, Amos Bronson Alcott, and by her former tutor, Henry David Thoreau. 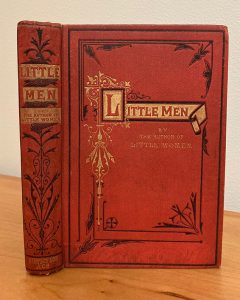 Little Men appeared first in London in May 1871, and then in the United States in June. Alcott’s Boston publisher, Roberts Brothers, sold 50,000 copies in advance. Little Men, following the success of the two parts of Little Women and An Old Fashioned Girl, cemented Alcott’s ascent to literary fame and fortune. Louisa was able to assist Anna with purchasing a home in Concord and with providing for her boys.