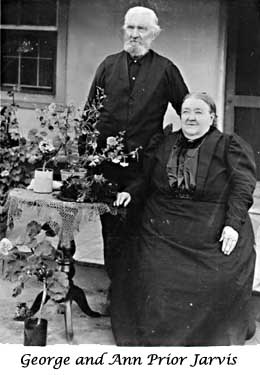 Image found at “The George and Ann Prior Jarvis Family Web Site” (http://www.george-and-ann-prior-jarvis.org/george_ann_prior_jarvis.html)

L. Tom Perry Special Collections is pleased to announce the availability of a newly digitized collection: Ann Prior Jarvis autobiographies and George Jarvis biography (MSS SC 2049). The collection includes two handwritten autobiographies, a biography of George Jarvis (1823-1913), miscellaneous materials, and photocopies of these items. Anne recounts the major events of her life and writes about her spiritual experiences and dreams. Also included are a brief biography of George Jarvis and patriarchal blessings of family members.

On March 28, 1857, George & Ann Jarvis sailed from England to Boston, Massachusetts aboard the ship “George Washington,” arriving at the Boston Harbor on April 20. On June 19, 1860, George, Ann, and their six children left Florence (Omaha), Nebraska on their trek west. They were part of the Jesse Murphy Ox Train Company. They arrived in Salt Lake Valley, Utah Territory, on August 30, 1860.

In October 1861 George volunteered to be among these first pioneers who established St. George, Utah. He and his family arrived in St. George on December 5, 1861. While there, George assisted in the construction of the St. George Temple.

On April 4th, 1878, Mary Webb, a widow, was sealed to George Jarvis as a plural wife in the St. George Temple. In 1902, George Jarvis was ordained a Patriarch in St. George.