In 19th century England, periodicals were a popular and cost-effective way for readers to gain access to literary material, whether prose or fiction. Special Collections actively adds new periodicals and serials to the Victorian and other British literary collections. Here are two recent acquisitions featuring the work of major 19th century literary figures: 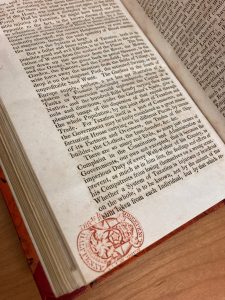 The Friend : a literary, moral, and political weekly paper, excluding personal and party politics and the events of the day. [Penrith, England]: Printed and published by J. Brown, and sold by Messrs. Longman and Co. … and Clement … London, 1809-1810.

Samuel Coleridge produced a periodical, The Friend, between 1809 and 1810. It contains Coleridge’s essays on a wide range of subjects, from the political to the philosophical, and poetical works by William Wordsworth. L. Tom Perry Special Collections recently acquired a copy of the original issues of The Friend to add to later reprints edited by Coleridge and others later in the 19th century. Note the stamps on the original issues, which were later gathered into a single volume. 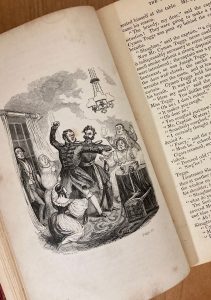 The Library of Fiction, or, Family Story-teller: consisting of original tales, essays, and sketches of character. Ed. Charles Whitehead. London: Chapman and Hall, 1836

The library of fiction, or, Family story-teller was a serial publication issued in 16 parts from April 1836-July 1837. It contains short fiction and literary sketches, including two contributions by up-and-coming young writer Charles Dickens. Dickens’s story “The Tuggses at Ramsgate” was the opening story in the publication and is shown here with an illustration by Robert Seymour.