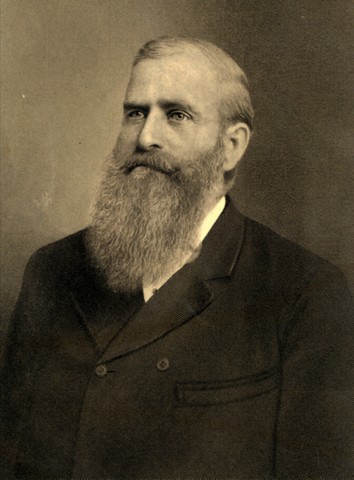 L. Tom Perry Special Collections is pleased to announce the availability of a newly digitized collection: Charles Ora Card papers (MSS 1543).  This collection contains materials pertaining to the life and work of Charles Ora Card, and includes personal journals, letters, and office journals ranging from 1871 to 1903. They cover Card’s responsibilities in the Church of Jesus Christ of Latter-day Saints both in Logan, Utah and Southern Canada as well as construction of various canals, roads, and buildings. They also discuss his relationships in polygamy, the colonization of Alberta, Canada by Mormon pioneers including association with the Canadian government, and documentation of much of the history of Logan, Utah and Cardston, Canada while he resided in each place. Materials dated 1871-1903.

Charles Ora Card was born on November 5, 1839 to Cyrus William Card and Sarah Ann Tuttle. The Card family became associated with the Church of Jesus Christ of Latter-day Saints in 1843. charles was baptized by his Uncle, April 12, 1856. He crossed the plains as part of a handcart company arriving in Salt Lake Valley September 1856. Charles became a member of 56th quorum of the Seventy, in Farmington before his family moved to Logan in March 1860. While in Logan, he was involved in education, building of the Logan Tabernacle and the Logan Temple, as well as became the Cache Stake President. Early in 1887, Charles was asked by John Taylor to relocate and settle southern Alberta, Canada with a group of saints, though his not all of his families and wives and came with him. He established the town of Cardston. He was over the Canadian Mission and then the Stake President of the Alberta Stake for about twelve years starting in 1890. He was released as Stake President and became a patriarch September 1902. He was carried to Logan in December 1903 and he died in Logan September 9, 1906.