Edna Beilenson and The Distaff Side

Edna Beilenson’s husband Peter founded the Peter Pauper Press, and after their marriage, she worked alongside him as a typesetter. Her career expanded into printing, publishing, and book design. In the 1930s, Beilenson organized a group of women who were involved in printing and the graphic arts into a sort of collective called The Distaff Side.

Their first production was a book called Bookmaking on the Distaff Side (1937). Each signature of the book—31 in total—was printed by a different member. It includes essays (ranging from scholarly to satirical), literature, and artwork commenting on the overlooked contributions of women in the book trades throughout history. The Distaff Side worked sporadically over the ensuing decades toward charitable causes, including organizing a book fair to raise relief funds for Britain in the early years of World War II. Their third and final book, A Children’s Sampler, was published in 1950 to benefit a children’s medical charity. 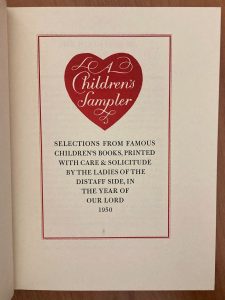 Title page of A Children’s Sampler 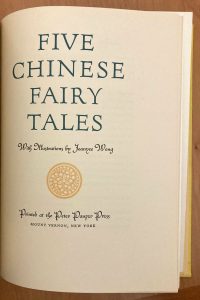 Beilenson edited a series of cookbooks published by the Peter Pauper Press during the 1950s. She became sole proprietor of the company after her husband’s passing in 1962. Beilenson was active in many organizations related to the printing profession, and she was the first woman to serve as president of the American Institute of Graphic Arts. She also designed and printed two different titles for the Limited Editions Club book series. More information about Beilenson can be found in Sean Donnelly’s history, The Peter Pauper Press of Peter and Edna Beilenson (University of Tampa Press, 2013), available in Special Collections. 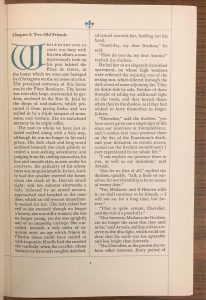 The Man in the Iron Mask, printed by Edna Beilenson for the Limited Editions Club, 1965.