A humorist, Beerbohm parodied high society and the prominent artists and writers of the 1890s through caricatures and comical essays which sometimes shocked the establishment. He would go on to have a long career, publishing 15 books and thousands of caricatures, and even broadcasting essays over BBC radio. He is still remembered for his sparkling wit and his ties to major figures of British arts and letters, including George Bernard Shaw and Oscar Wilde.

Beardsley’s career was brief, troubled, and revolutionary. He gained immediate notoriety for his unique illustration style, but his penchant for blending beauty with the grotesque polarized both critics and the public. Though he died at the young age of 25, his work transformed the world of art and design and still inspires artists today. 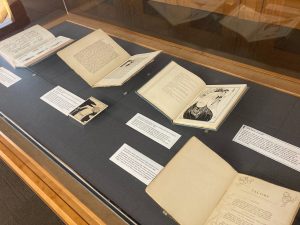 To commemorate their work and friendship, Special Collections has mounted a new small exhibit. Two Decadent Dandies: Aubrey Beardsley and Max Beerbohm in the Outrageous 1890s showcases drawings, books, and periodicals produced by the two artists when they were just finding success in the world of arts and letters. The exhibit is on display in Special Collections’ lobby through the month of August.